Sales & accounts based in the River Dart area 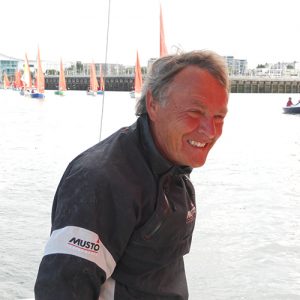 Simon first took up Sailmaking in 1977. His diligence and quick leaning led him to become MD of Westaway Sails in 1982 at that time the leading Sailmakers in the South West. Simon become one of the first sail designers in the UK to invest in Computed Aided Design software moving the dark art of sail design into the 21st Century establishing himself as a highly regarded sail designer.

After training many sailmakers in his time (Sean included) Simon sold Westaway Sails and then started Dart Sails and Covers with his sister Jane in 2006, acting as front of house, designing new sails and looking after the admin side of the business. Simon is a highly respected and knowledgeable honest guy who has built up a loyal band of customers and friends.

Simon continues to offer the same advice as well as guide Sean and Dominic through all aspects of the business, Simon also looks after the accounts side of the business and is always available for a chat and general advice.